The player can use a Workbench Upgrade Kit to upgrade the standard Workbench in that particular area, allowing the player to craft new mechanical items of a higher rank.

Workbenches can be found in every single safe house in Wellington Wells, though they can also be rarely found in Wastrel's Houses, along with a recipe or two ontop for a craftable item.

There are two workbenches outside of Nick's Fab Pad.

Do note that there is a small chance for a recipe to not appear on the table. 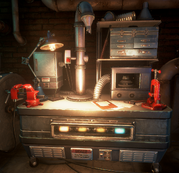 An upgraded workbench.
Add a photo to this gallery
Retrieved from "https://we-happy-few.fandom.com/wiki/Workbench?oldid=11783"
Community content is available under CC-BY-SA unless otherwise noted.