The Wellington Wells Constabulary is the Bobby Headquarters located in Hamlyn Village. Unlike the rest of the buildings in the village the Constabulary has a more modern design on the building.

Sergeant Sergeant is the leading officer in the Constabulary, Constable Bevan acts as the duty officer and Constable Cozans acts as the records officer.

Events in We Happy Few Edit

Arthur learning that the constabulary knows the location of Dr Faraday walks into the building, and using his former position within the Department of Archives, Printing, & Recycling at the Wellington Wells City Hall to convince the Bobbies that he comes from the orders of Victoria Byng and concerns on the bridge has drawn her patience to a near end. Not wanting to go against Victoria the Bobbie let him past. However the records officer tells him he can't as it is a secret. So Arthur takes the information by sneaking into the records and finds Farady has been relocated to Lud's Holm.

The Bobbie take Sally in for questioning for her recent visits to the Garden District, as well as meeting up with several individuals, however they don't push the later further due to the worry of upsetting general Byng.

In celebration of Sally making another batch of Blackberry Joy the Bobbie make a sing a long of 'Mrs Boyle makes the world go round'. However she is warned that the joy may not last as long as last time.

Concept art for the exterior, by Whitney Clayton. 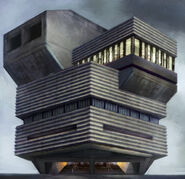 Final concept for the exterior.
Add a photo to this gallery

Retrieved from "https://we-happy-few.fandom.com/wiki/Wellington_Wells_Constabulary?oldid=10332"
Community content is available under CC-BY-SA unless otherwise noted.