Varies, but never lower than 30

They Came From Below

Wellies, or Wellettes, are the civilized enemies in We Happy Few. They are proper citizens of Wellington Wells who take their Joy on a daily basis without any trouble.

Due to their regular and heavy use of Joy, the Wellies spend the entirety of their lives in a drug-induced state of euphoria, with them seeing the world as bright, vibrant and colorful. The player can get a taste of this by taking Joy themselves.

They will react violently to the sight of Downers, Wastrels, or anyone else who might compromise their Joy-induced Utopia.

In order to always have access to Joy, all foodstuffs and drinks in Hamlyn Village and the Parade District are laced with Joy.

The Wellies and Wellettes all only have one face, purposefully made to look iconic and dapper, while still generic enough to not draw attention to its repetition.

The Wellies are lanky and friendly, often seen wearing pork pie hats or flat caps, turtlenecks or dress shirts with a vest on top, and rectangular glasses. Some Wellies wear moustaches over their happy face masks.

The Wellettes are stylish and modern, often seen wearing simple colorful dresses that would've made a statement, were it not for everyone wearing the same clothes that all reject the past. They have cat-eye makeup and light-pink lipstick over their happy face masks.

Much like the Wastrels, they're all very thin and appear to be starving. This is due to the severe food shortage in Wellington Wells.

Starting at 7:00 AM, the Wellies will spend their day strolling around the streets of the city, sitting on benches, reading newspapers, jumping in puddles, playing patty-cake with one another, brewing coffee and, most importantly, taking their Joy.

At 8:00 PM, all Wellies will vacate the streets and return home to abide by the curfew. From 9:00 PM onwards, they will be asleep.

The Wellies will sleep until 7:00 AM, when they'll wake up and return to their routines.

While following the same behaviour seen in Story Mode, the Wellies have far more actions that they can make, such as drinking coffee, selling and taking newspapers, sleeping on benches, lean against walls while smoking a pipe, and much more. All of these actions can be done by any of the Wellie variants. (see Gallery)

Wellies can also talk to each other, though they both have to be men. Standing nearby, the player is able to listen in on their conversation.

If a Wellie decides to sleep on a bench, the player can suffocate them as they usually would if the Wellie was sleeping on a bed. A sleeping Wellie will not react and wake up to anything the player does, however, they will react if the player does something illegal before they've gone to sleep.

When hostile, Wellies wield various weapons, such as:

Wellies in the Parade District are far more dangerous and wield weapons like The "Pipe Down", The "Spitfire", or The "No Questions Axe".

The kind of weapon they attack with will go up in difficulty in each Act, meaning they may wield Frying Pans regularly during Act I, but will wield The Spitfire during Act III.

Taking the advice from Uncle Jack, they will take matter into their own hands and fight Downers themselves, and if their health gets low enough, they'll plead for their life before running away.

The following actions will direct a Wellie's attention to the player:

The "Oh, You" skill allows the player to run, jump, crouch, spy, and climb wherever they want.

Wearing a Boiler Suit allows the player to tamper with control boxes without being suspicious.

The "Nothing To See Here" skill allows the player to not be applied to curfew, allowing them to walk around safely during the night, though only in Hamlyn Village.

The archetypal British old lady in Hamlyn Village, they are special 'alarms' who will draw a crowd when they spot a Downer, though they'll never attack one themselves.

The law enforcement in Hamlyn Village, though they can sometimes be found guarding certain locations in the Garden District. The Bobbies are much stronger than the average Wellie.

As the name suggests, the Doctors are tasked with treating the ill, though their solution often results in injecting the sick with more Joy. They have a keen sense of smell and can sniff out people who have forgotten to take their medicine.

War veterans during WWI and II, among other battles. The Soldiers are only encountered at the Victory Memorial Camp in Ravensholm, and they only appear in Hamlyn Village during Survival Mode.

The height of society, these Wellies are only found in the Parade District. They're responsible for handling all of the governing, administrative, management and bureaucratic work in order to keep the whole city running.

As the name suggests, Council Workers are tasked with repairing and maintaining the infrastructure and buildings in the city, but because of their heavy intake of Joy, they can be often be found slacking off elsewhere. All of the workers are men.

Wellies who have a desire to be punished, but can't remember why. They can only be found at The Reform Club and The Church of St. Genesius. Unlike regular Wellies, their routine is flipped; they're active during the night, and gone during the day.

In order to fit in at the club, the player has to wear the Rubber Cat Suit.

Special to the Lightbearer DLC, the fans have an obsession with Nick Lightbearer, to the point of violence. The girls all wear the same dresses depicting the Union Jack Flag, and the paparazzis all appear as regular Wellies, though with a camera around their neck.

The paparazzis will not attack Nick, but they will blind him with the flash of their cameras.

Each of the different Wellie variants[]

The following items can be gathered from Wellies' corpses, do note that it's randomized:

Concept art for the Wellies/Wellettes, by Whitney Clayton.

A very old concept for the face of a Wellie.

An early chase scene, this would later be redrawn to be the cover art of the game.

Wellies towering above the player.

Wellies in the Parade District.

The re-drawn chase scene as the cover art for the game.

NPC loses weapon, resorts to fists. (is possible to not lose weapon at all)

Two Wellies kissing. (This doesn't happen in the final game.)

A couple of Wellies. 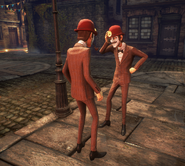 Two Wellies talking to each other.

A Wellie drinking Toasted Chicory against a wall.

A Wellie brushing the streets.

A Wellie taking a newspaper.

A Wellie reading a newspaper. 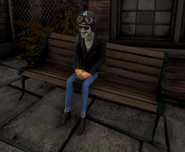 A Wellie politely sitting on a bench.

A Wellie reading the newspaper on a bench.

A Wellie couple cuddling on a bench.

A Wellie sleeping on a bench.

A sick Wellie after taking some Joy, they'll take another Joy soon afterwards. 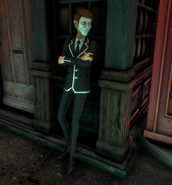 A Wellie leaning against a wall. 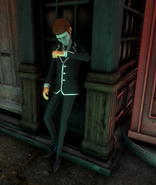 During the 11219 build of We Happy Few, the Wellies had very limited variety in their appearance. They'd often generate wearing a black, red, green, blue, or beige turtleneck shirt with a brown, beige, or houndstooth coat on top, with green, red, or black pants with black shoes. They could also generate wearing a number of different accessories such as pork pie hats, flat caps, pipes, glasses, moustaches, or none at all.

During the 11219 build of We Happy Few, the Wellettes had very limited variety in their appearance. Their dresses only had three patterns with very few colour variations, the dotted dress only came in white and turquoise, the half toned dress only came in white and pink, and the mostly monocoloured dress came in black, yellowish green, reddish blue, and turquoise. As for accessories, they could generate wearing various hats or glasses.

Inside of houses, they'd be standing by the very edge of a door and would only be able to continue with their routine once the player opened the door they're standing by, although this would only lead to them initiating combat with the player.

Wellies could only spawn during the day: 7AM till 10PM.

The pink and white dress.

The white and turquoise dress.

The brown and red pants outfit.
Community content is available under CC-BY-SA unless otherwise noted.
Advertisement