We Happy Few is an action-adventure survival horror game developed by Compulsion Games released in on August 10th, 2018. The game is available for Windows, MAC, Linux via Steam, PlayStation 4, and Xbox One.

There were originally seven people working on the game who started building prototypes for the game in January of 2014. The studio has since expanded their team and eventually placed the game on Kickstarter. After four years of development and a delay, the game was released on the said date.

The studio describes the game as a "game of paranoia and survival, in a drugged-out, dystopian English city in 1964."

We Happy Few is about an old English city, called Wellington Wells, that is haunted by the ghosts of its recent past.

In 1933, this world deviated from our own, as the Germans successfully invaded and occupied England during World War II. And while the state of England as a whole is unclear, a fair bit of Wellington Wells is in ruin.

However, during the Occupation, all citizens of Wellington Wells, called Wellies, had to do A Very Bad Thing that involved sending all of their children to Germany, without a clue as for what was going to happen to them.

To calm their guilt and sorrow, there seemed to only be one solution. To forget everything that they had done. As such, a miracle drug was invented, called Joy.

Soon, the citizens started rebuilding parts of the city, while leaving the most damaged areas ruined. This caused the whole of Wellington Wells to be blended with both highly advanced futuristic technology, and leftover rubble from a near past alongside each other.

Everyone is happy, as long as they take their Joy, and forget.

There are two modes the player can choose, Story Mode which explains most of the city's history, as well as gives insight into each of the playable characters, and Survival/Sandbox Mode which is focused on surviving and escaping Wellington Wells.

There are three playable characters that all serve as the protagonist in their own Act.

They all also have one goal in common; to escape this wretched place. All for different reasons.

All playable characters are known as Downers, people who can take Joy, but refuse to. And no decent person in Wellington Wells likes Downers, so the player needs to adapt unless they want to get thrashed.

In order to survive and escape Wellington Wells, the player has to not only take care of their own needs, but also be mindful of the unspoken rules to fit in with the locals. All the while hunting for supplies to craft devices and weapons that'll aid them in getting out of town.

A big part of We Happy Few is NPC interaction and hiding in plain sight. NPCs will let the player know when they're suspicious of them, and their statements will inform the player of what they're doing wrong. The player can, however, also check their hud and stats for further information.

Upon every new game, or moving to the next Act, the world resets with a brand new map layout every time. Locations stay the same, but are located differently, and side quests that the player didn't find before may be available in the new game.

Like the name suggests, the player wakes up in an unknown location, and has to work their way to the end. On their way, they have to collect quest items that are needed in order to escape.

The player will have to know the rules by hand and remember to fit in unless they want to start a fight.

Hunger, Thirst, and Sleep is deadly, and is sure to kill the player if they're neglected.

Concept art that turned into the game's cover.

Add a photo to this gallery 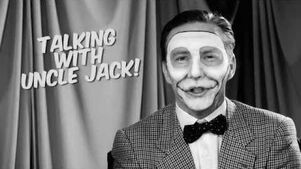 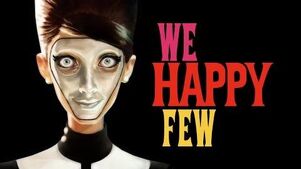 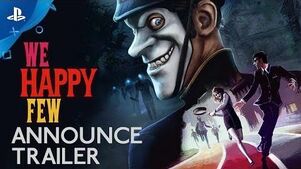 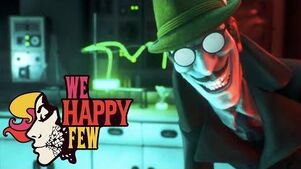 We Happy Few- 'The ABCs of Happiness' (Official) 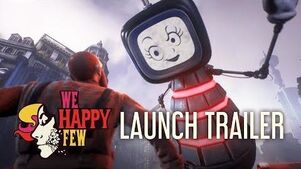 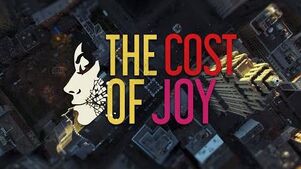 Retrieved from "https://we-happy-few.fandom.com/wiki/We_Happy_Few?oldid=16377"
Community content is available under CC-BY-SA unless otherwise noted.