Residents of the Garden District

Varies, but never lower than 30

Wastrels, or Wastrellettes, are Wellies who have reacted badly to a bad batch of one of the three currently available flavours of Joy, causing permanent inability to take Joy at all. They are the first enemy the player encounters in the Garden District.

Wastrels and Wastrellettes are roughed up and dirty. They wear torn clothes that bear a similar appearance to the clothes that Wellies wear, some may have broken glasses and twigs in their hair.

They appear to be severely starved, not unlike the Wellies in Hamlyn Village.

All of the Wastrels, apart from a select few, have a randomized appearance. This is because they are mere background characters meant to populate the land.

Because of their inability to take Joy anymore, they are social outcasts forced to live in the Garden District, and are unable to get to the other areas in Wellington Wells.

Before becoming Wastrels, they were Wellies who lived in Hamlyn Village. It's only after they had a bad reaction to Joy that they first became Downers and got chased out of the Village. Growing a deep hatred for the people who chased them out.

As such, they attack players who dress properly and get suspicious of people who are high on Joy

If the player stays away from Joy and fine clothing they will be left alone the most part. However, a Wastrel high on a hallucinogen, or caught the plague, can still attack the player even if they're conforming.

If talked to, and the Wastrels trust the player due to their clothing, they will gossip on their regret of their dark past or give the player survival tips.

After 9 PM, the majority of Wastrels will disappear from the streets while Headboys begin to patrol the roads. The Wastrels will return at 7 AM. Note': Even if the player has the Nothing To See Here' skill unlocked, Headboys will still get aggressive towards the player if they catch them out during curfew.

While a Wastrel can usually be killed easily using a medium-grade weapon like a pipe or shovel, they can be a lot harder to deal with if they attack as a group. Their weapons include their own fists, rocks, a branch, or a Double Knocker. Bleeding can be caused if they use a Pointy Stick.

Killing Wastrels for items is not generally lucrative as the items they usually carry are low quality.

There are things that will direct a Wastrel's attention to the player.  These include:

Below is a list of items the player will get when looting the Wastrel's bodies: 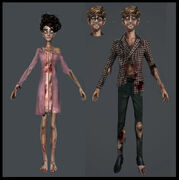 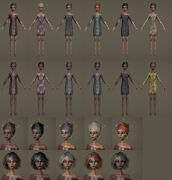 The wastrellette models, note how two wears the unused yellow dresses from the concept art. 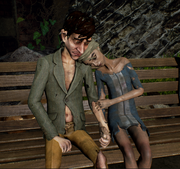 A couple sitting on a bench. (This doesn't happen in the final game)

NPC loses weapon, resorts to fists. (is possible to not lose weapon at all)

Retrieved from "https://we-happy-few.fandom.com/wiki/Wastrel?oldid=16988"
Community content is available under CC-BY-SA unless otherwise noted.