War Ration is a consumable food item in We Happy Few. War Rations are what remains of the food stores manufactured and stockpiled by the British military during World War II.

They are M.R.Es that were used to feed soldiers during the war and thanks to their long shelf life, they still remain fully edible 20 years later.

After the end of the war, most of the War Rations were left in the hands of the Home Army Soldiers on Ravensholm, although a small quantity of them have also trickled into civilian hands since then.

War Rations are a very valuable item as they, like Victory Meat, are a highly nourishing food item that is neither spoiled nor contaminated with Joy.

Eating a War Ration will restore a large chunk of hunger and increase stamina for an extended period of time. In addition to that, eating it will also allow the player to temporarily regain health from standing in toxic fog instead of losing it.

War rations are very hard to come by since they rarely drop from Soldier bodies and they can only rarely be bought from the butcher. They can be found in greater abundance in the military camp and a handful of them can also be found inside the pantry of Lawrence MaClear's house. 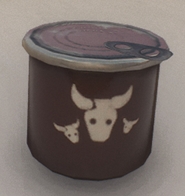 Item as seen in game
Add a photo to this gallery
Retrieved from "https://we-happy-few.fandom.com/wiki/War_Ration?oldid=12246"
Community content is available under CC-BY-SA unless otherwise noted.