Virgil Dainty was Nick Lightbearer's ex-agent before getting murdered by Foggy Jack prior to the events of the Lightbearer DLC. In the game Nick hallucinates Virgil as a talking rat who guides him to remembering, finding out the truth and avenge his death.

"Top of the fucking mornin', to you too."
— Virgil first adressing Nick Lightbearer.

Virgil Dainty is found in the arms of a golden statue wearing a dark blue jacket with light blue pants, by using console commands to get up close to his corpse it is possible to see that he wears a white, red and blue striped tie, a small black hat with a bow on it, large black glasses, brown hair and green eyes.

Virgil first appears during the opening cutscene when Nick wakes up from a nightmare, who at first mistakes him as a fan he slept with before seeing that he's a rat.

Nick, in shock, asks Virgil if he's hallucinating him as a rat or if it's a real rat and he's just hallucinating the voice of his agent. Virgil reminds he's his ex-agent, after having sacked him.

After this point, Virgil tells Nick he needs to set things right. And from that point on becomes Nick's guidance, remember what had happened to him, and redeem himself.

Halfway through the DLC, the real body of Virgil Dainty can be found in the arms of a golden Nick Lightbearer statue. 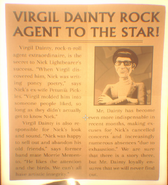 An article about Dainty.

Close up of Virgil's face.
Add a photo to this gallery
Retrieved from "https://we-happy-few.fandom.com/wiki/Virgil_Dainty?oldid=12124"
Community content is available under CC-BY-SA unless otherwise noted.