"I'm afraid we've come to the end of our time."
— Uncle Jack's phrase near the end of every episode of his show

Jack Worthing, mostly known by his stage name Uncle Jack, is a comedian, TV and radio host of the Wellington Wells broadcasting services in We Happy Few. He is viewed as the "smiling face" of Wellington Wells by the general population.

Few remember Jack's past, which is no surprise given the heavy use of Joy that the citizens of Wellington Wells take.

Jack Worthing was the former lead actor of the Will Kemp Traveling Players prior to World War II. During the German occupation, Jack was the voice of the German Occupational Authority. He accompanied his daughter, Margaret, in her lead of the 1946 Battle of Flowers as Junior Field Commander.

When the Germans demanded to have the kids be sent to their country for a Project, he attempted to hide Margaret, but Ollie Starkey ratted them out. This ultimately ended up with Margaret getting shot by the German soldiers.

Jack subsequently began taking Joy to forget about the traumatic incident, and usually avoids anything that can remind him of her out of grief. After the 'Victory' over the Germans, it is stated that Jack was arrested, but later released to become the smiling face of the Wellington Wells entertainment shows.

After the Occupation, Jack became host to the Wellington Wells Broadcasting Services to cheer up the city's inhabitants. He is broadcasted everywhere in the city. His many shows were created to make Wellies laugh, smile, and to reassure them.

Throughout all of the acts, Jack is an omnipresent figure through the radios, television sets, and newspaper articles.

In Arthur's story, the ‘O‘ Courant writes in its final article (among other things) that the recent airings of Jack's show are in fact reruns, which hints that something has gone terribly wrong.

In Act III, when Ollie ventures to the Broadcasting Tower in the Parade District to tell Jack about the truth regarding the imminent famine in Wellington Wells, he discovers that the studio room is wrecked, along with a missing Jack.

He also finds a note telling the employees not to broadcast the same episode more than once per week, revealing the dreadful truth that Jack has disappeared, and all of his recent shows have been nothing but mere reruns, with Joy-induced amnesia preventing people from realizing that. To Ollie's horror, this reveals just how oblivious the people of Wellington Wells are to the reality of the city.

In the studio, Ollie finds the last tape that shows the events right as things went wrong. Not only that, but it also shows Jack desperately telling people about the collapse of the food production, the worsening food shortage, and attempts to get them to stop taking their Joy.

As Jack reads through his alarming report, he starts becoming increasingly stressed, alarmed and unstable, until he finally suffers a complete mental breakdown, grabs a cricket bat and goes berserk.

He's seen running around the studio smashing things, while madly repeating his catchphrase "We've come to the end of our time!", before finally approaching the camera, peering into it as he repeats the phrase one last time, and smashes it, abruptly ending the broadcast.

Ollie proceeds to broadcast the tape to all inhabitants of Wellington Wells, determined to tell them the truth about the situation.

Although never confirmed in-game, it is heavily implied that Jack subsequently went mad and became the serial killer "Foggy Jack".

Jack's personality, or rather the "face" that he wears on television, is a bright, charismatic, and cheery- albeit slightly menacing, persona. He will spin bad news stories into positive ones with relative ease, and will address people with light teasing and humor.

He frequently laughs, jokes, and smiles, trying to make people look on the bright side of things. One of his shows reveals that he is a devout Anglican, indicating that he is one of the few residents of Wellington Wells who had been known to practice religion.

However, the side that Jack has been trying to suppress is sullen, grim, and overall depressed. Ever since his latest dosage of Joy (which appears to have been of a "bad batch"), he starts to remember things, talking nostalgically about his daughter, losing himself in thought.

As more memories return, he begins to lose himself to madness, managing to get out the truth before completely snapping and wrecking everything in the studio. 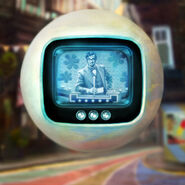 Concept art before Julian Casey's cast in the role.

Concept art after Julian Casey's cast in the role. 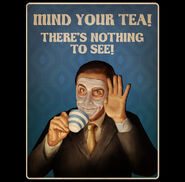 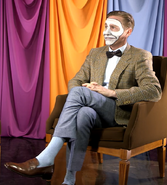 Uncle Jack in color, seen in the kickstarter video.

I Hear You! Edit

I HEAR YOU - ENJOYING SIMON SAYS - Uncle Jack - We Happy Few
We do love our games, don't we.

I HEAR YOU - JOY - Uncle Jack - We Happy Few
You can never have too much Joy.

I HEAR YOU - OLD NEWSPAPERS - Uncle Jack - We Happy Few
There's a stranger living in my house!

I HEAR YOU - WHOSE UNCLE ARE YOU? - Uncle Jack - We Happy Few
Whose uncle are you?

I HEAR YOU - WORD OF THE DAY - Uncle Jack - We Happy Few
The word of the day is "epistemology".

NEWS HOUR - ARE THEY SLEEPING - Uncle Jack - We Happy Few
What to do about people lying in the road?

NEWS HOUR - DO WHAT YOU SHOULD BE DOING - Uncle Jack - We Happy Few
Are you doing what you should be?

NEWS HOUR - GOING OUT AT NIGHT ISN'T BRIGHT - Uncle Jack - We Happy Few
It's best to stay home at night.

NEWS HOUR - LOOK AT YOU - Uncle Jack - We Happy Few

NEWS HOUR - WHAT TO DO ABOUT DOWNERS - Uncle Jack - We Happy Few
What to do with Downers!

NEWS HOUR - PSA DOWNERS - Uncle Jack - We Happy Few
What do we do about Downers?

NEWS HOUR - RANDOM THINGS THE FACE SAYS - Uncle Jack - We Happy Few
The shocking thing is not what you thought!

NEWS HOUR - NEWS ITEMS - Uncle Jack - We Happy Few
A roundup of all the best news!

HUMOUR HOUR - BRITS - Uncle Jack - We Happy Few
We love to laugh at ourselves, don't we.

That Tastes Amazing! What Is It? Edit

THAT TASTES AMAZING, WHAT IS IT - BREAD EXTENDERS - Uncle Jack - We Happy Few
You don't need flour to make bread!

THAT TASTES AMAZING, WHAT IS IT - EDIBLE WEEDS - Uncle Jack - We Happy Few
Did you know many weeds are scrumptious?

THAT TASTES AMAZING, WHAT IS IT - LICHENS - Uncle Jack - We Happy Few
Scrape your lunch off rocks!