Fit in with those awful wastrels. Upsets decent folk, obviously

The Torn Suit is a craftable outfit in We Happy Few. It's a dirty and very shabby Proper Suit that is missing the white dress shirt, has several holes in it, the necktie is untucked and loosely draping down the front and multiple buttons appear to be undone. In first-person, the Torn Suit also has many cuts and scrapes all over it.

The Torn Suit is the signature outfit of Danny Defoe who wears it at the beginning of Act I and the player gains access to it shortly after that.

The Torn Suit allows the player to move around the Garden District and blend among the Wastrels there without problems.

If worn in Hamlyn Village or the Parade District, however, it will anger Wellies, Bobbies and everyone else living there. Arthur gains access to the Torn Suit during the quest "Dress for success" while Sally has her torn suit in her Garden District Kit. 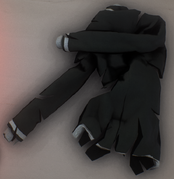 The Torn Suit as worn by Danny Defoe (albeit missing the necktie)
Add a photo to this gallery
Retrieved from "https://we-happy-few.fandom.com/wiki/Torn_Suit?oldid=15119"
Community content is available under CC-BY-SA unless otherwise noted.