"How did people ever stay awake before we invented coffee?"
— Nick Lightbearer when ordering free coffee.

Better than rest
Toasted Chicory is a drink in We Happy Few. Drinking it will give the player a small stamina boost and increase thirst significantly. 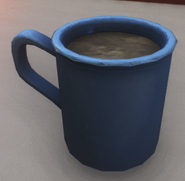 Item as seen in game
Add a photo to this gallery
Retrieved from "https://we-happy-few.fandom.com/wiki/Toasted_Chicory?oldid=13397"
Community content is available under CC-BY-SA unless otherwise noted.