The Headmistresses are the gargantuan robotic supervisors of Wellington Wells, that appear in the Hamlyn Village and the Parade District during We Happy Few. An unusually giant Headmistress controlled by Dr. Helen Faraday appears in They Came From Below DLC.

They monitor the surrounding area and if they detect anyone who is not on Joy, she will warn them to step away. should the downer continue to remain in the area, they will attack them, flag them as targets and alert nearby Bobbies. If there are none nearby, they will summon reinforcements through Bobby Poppers if there are any present.

The Headmistress is a massive, around 10 meters tall, robotic machine with a round, somewhat insect-like torso that has 3 blue stripes (red when it is disturbed) on it and has a large television screen on a thick neck as its head, with a large antenna on top of its head. The entire machine is propped up on a large podium and the Headmistress' "face" consists of a cartoon-like image of a woman projected on the screen.

It also has long, thin metallic jointed arms with large gloved hands on the end of them. The Headmistress that Helen Faraday controls during the events of They Came From Below is much larger than other typical headmistresses, and also has a monitor broadcasting Faraday's face, allowing her to speak through it.

When idle, the Headmistress remains stationary on its podium, randomly rotating around to survey the area. The Headmistress has a full 360-degree field of vision around it, meaning it is impossible to sneak past "her".

If anyone who is not on Joy gets close to the Headmistress, "she" will bear down on them and order them to step away and start charging up her large Spanker (Antenna) while emitting a loud beep every second for each charge-up stage. If the perpetrator does not step away from the Headmistress within 3 seconds or take their Joy, she will emit an even louder beep and zap the perpetrator with a huge area-of-effect electrical shock that deals damage to everything caught within the effect radius while flagging the perpetrator as a target, causing Wellies to become aggressive and hostile towards them.

The Headmistress is completely invulnerable to any and all attacks and cannot be fought or defeated. However, some Headmistresses in The Parade are linked to control boxes which can be targeted with Shortspikes or Polarity Devices.

In the They Came From Below DLC, in addition to the one monitoring Inis Holm, which is destroyed along with Inis Holm itself by the alien robots, an unusually large Headmistress controlled by Dr. Faraday is fought as the final boss. This version has gold-colored plating and is much more heavily armed, being equipped with a large laser cannon and a missile launcher(both of which are retractable) in addition to its Spanker. It can also electrify the floor in front of it and summon a group of alien robots.

The Headmistress aggroing on "her" target.

The Headmistress in a park.

Concept art for The Headmistress, by Whitney Clayton.

Helen Faraday displayed on a Headmistress. 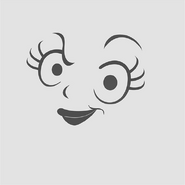 Two unused screen faces of The Headmistress.
Add a photo to this gallery
Retrieved from "https://we-happy-few.fandom.com/wiki/The_Headmistress?oldid=12164"
Community content is available under CC-BY-SA unless otherwise noted.