Strange Meat is a consumable food item in We Happy Few. When the player eats it they will get some of their hunger restored but they will also get food poisoning. 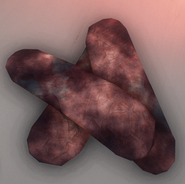 Item seen in game
Add a photo to this gallery
Retrieved from "https://we-happy-few.fandom.com/wiki/Strange_Meat?oldid=12843"
Community content is available under CC-BY-SA unless otherwise noted.