Spud Murphy is a character in We Happy Few. He is a regular customer of Sally Boyle's Blackberry Joy, and is the first enemy Sally Boyle faces at the beginning of Act Two.

At the beginning of Act Two, Spud Murphy is found frantically and repeatedly ringing the doorbell of Sally's Interplanetary Travel Agency hoping to get his fix of blackberry joy. When told by Sally that she is all out of the substance, Spud goes wild and knocks at her door until smashing it down. Once inside, the berserk Spud accuses Sally of hoarding the blackberry joy for the bobbies. He assaults her, pushing her to the ground and briefly knocking her out. When Sally comes to, he has finished plundering her laboratory in search of his fix, to no avail, and runs upstairs to Sally's living quarters. There, he finds the infant Gwen and picks her up, in disbelief at the sight of a baby and trying to convince himself that the child is really a rat. Before dropping the baby, Sally uses a knockout syringe on Spud and catches Gwen as she falls, while Spud lands to the floor unconscious. Sally is then forced to drag Spud outside, placing him in a trash can in the alley outside her door. 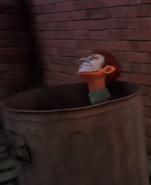 Spud in the alley trash can.
Add a photo to this gallery
Retrieved from "https://we-happy-few.fandom.com/wiki/Spud_Murphy?oldid=13338"
Community content is available under CC-BY-SA unless otherwise noted.