Safes are containers found within houses in both the Garden District and Hamlyn Village, usually on the middle to top floor.

When opened, the safe will have similar contents to a dig spot, in this case crafting components, gadgets and sometimes weapons. The safe will also always contain Sovereigns, although the amount can vary. In Survival Mode, safes can also contain Gildy Pleasure Masks, which give Skill Points when collected.

There are two versions of the safe, one that is a medium sized metal box, these safes can be found in most Garden District houses and only in one Hamlyn Village house. The player has to look for a button somewhere in the house, then go to the second floor bedroom to find a painting having shifted and reveal the safe behind it.

The second safe only appears in Hemlyn Village houses, this safe appears with an ornate steel door and a number pad on the lower part of it.

Safes are always locked and can only be opened by either using an Electro-Lock Shocker in order to destroy the lock, this will only work on the safes in Hamlyn Village however, the regular safes require a Disposable Safe Cracker. 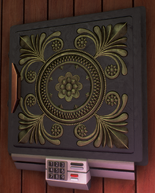 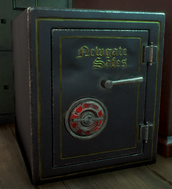 Garden District safe.
Add a photo to this gallery
Retrieved from "https://we-happy-few.fandom.com/wiki/Safe?oldid=11492"
Community content is available under CC-BY-SA unless otherwise noted.