Start a Wiki
"Don't be a Downer"
This article is still a stub. You can help us by expanding it.
"Strictly Enforced!"
This article contains plot details. If you haven't finished the game, please proceed with caution.

Minor Character
(We Happy Few)
Protagonist
(They Came From Below)

We Happy Few
They Came From Below

(They Came From Below)

Roger Bacon is a side character in We Happy Few and the protagonist of They Came From Below.

He is the assistant of Dr. Helen Faraday and the romantic partner of James Maxwell (Also referred to as "Moo")

Roger has brown hair and green eyes, he is most commonly seen wearing a navy blue jacket with a white and navy blue striped collar shirt underneath, beige pants and a sailor hat.

Roger is the more laid back and reckless compared to James, often pushing buttons and handling objets that he doesn't know what they do beforehand. He is easily empathetic towards non-human creatures and is the first to realize that the robots have emotions, immediately feeling regret over killing a dozen of them from earlier.

While he cares about the well being of James and Dr. Faraday, he isn't afraid to speak out when he thinks they're wrong about a situation. Much to the dismay of the two.

During Sally's Route, dialogue between Roger and James imply that Roger is bisexual, admitting that he was turned on by a woman whilst they were dancing.

Roger is first seen dancing around the house, as James yells at him from outside. When Arthur enters he can find him laying on the bed.

Roger and James are heard arguing before Sally arrives. While James blatantly lies about Dr. Faraday dying in a lab accident, Roger insists on telling Sally the truth. They reveal that she successfully created a portal out of Wellington Wells and left.

Roger and James are trapped inside Dr. Faraday's lab. Faraday is still absent from the lab. The two are panicking because they can't water her plants. Still fearful of Faraday's wrath, they ask Ollie to water the flowers for them in exchange for the bee cannon.

Events of They Came From BelowEdit

Two years prior the events of We Happy Few, Roger Bacon is living in Inis Holm. On November 26th, 1962 Roger heads into town to retrieve a Bobby Helmet and to the market to buy various items. As he is returning home, an explosion suddenly erupts from the lab.

Roger attempts to contact his boyfriend James via walkie-talkie to ask what just happened, but James does not answer. Roger runs inside and finds James in Faraday's Lab, unconscious, but still alive, although Faraday herself is nowhere to be found. After successfully waking up James, he and Roger begin searching around the house for clues as to where Faraday might have disappeared.

After a little bit of poking and prodding, the two of them discover a secret hatch which leads to a cellar that in turn contains an elevator. James tells Roger not to enter the elevator, saying that they have no knowledge of where it would bring them.

Roger decides to activate the elevator anyway, and it begins bringing them deeper underground, eventually bringing them into a vast industrial/research compound. On the way down, Roger briefly spots something strange walking across a catwalk, before the elevator's movement brings it out of view. Eventually, the elevator stops and opens up into a large control room.

He goes down the ground floor where the Ray Gun is in the middle. James warns him not to touch it, but goes against this and starts shooting at barrels.

Roger in We Happy Few.

Roger on the cover for They Came From Below. 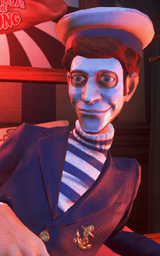 Close up of Roger's face.
Add a photo to this gallery
Retrieved from "https://we-happy-few.fandom.com/wiki/Roger_Bacon?oldid=14285"
Community content is available under CC-BY-SA unless otherwise noted.