Commander of the Home Guard

We Happy Few
We All Fall Down

General Sir Robert Byng is an army general and infamous figure throughout Wellington Wells, being one of the most powerful figures in the city, just below the Executive Committee.

Robert Byng is an older man with white hair and moustache, and blue eyes.

He wears a black suit with matching shoes, a white button shirt underneath, and a long black jacket with blue rims around the edges. He also adorns a blue scarf with two yellow stripes around it, as well as a blue tie with yellow spots.

Robert Byng is shown to act noble and kind, but has an uglier side to him that he keeps hidden away. He's capable of being cruel and manipulative towards certain people, even those closest to him. Robert reveals this when he nearly hits Sally and locks her in his safe house or when.

He also appears to be easily exasperated and irritated by things, like when Ollie comes to confront Robert for the second time Ollie comes to discuss about the fake tanks in the camp, as well as when he figures Victoria is off her Joy.

It's mentioned in notes from his wife that Robert also seems to have used people in order to get to higher positions of power.

Robert Byng served in India and was heavily traumatized by his actions there. There, he met his wife and they eventually had a daughter. He betrayed his wife and arrested her, apparently so he could become general. He took Victoria with him to Wellington Wells after her mother was arrested for being part of a group trying to force the British out of India.

Before he left, his wife wrote to him from prison telling Robert that Victoria should live with her grandfather, the king, in India, as she figured that Robert would mistreat Victoria and that she would be bullied for her race. However, Robert decided to take Victoria with him to England, possibly out of kindness but more likely just to prove her wrong.

Robert was a general during the German invasion, and after Britain surrendered, worked with the Germans to ensure that nobody would be killed.

In order to ensure that a rebellion wouldn't happen (for he believed that it would fail), he had his secretary Ollie Starkey deliver newspaper and glue to the Germans for the creation of papier-mache tanks to fool the people into believing that the Germans possessed superior firepower. He also was a collaborator of Colonel Von Stauffenberg on the Authority Project, though he didn't know the true purpose of it.

Some years after the thirteen and under children were taken by the Germans, General Byng wrote to Harry Haworth, a brilliant chemist, to create a drug that would effectively bring the spirits of the population up.

This came to be known as Joy. He also reinvented himself as a war hero and gained immense control over the Bobbies. He eventually became a patron of Sally Boyle and protected her with his influence from Anton Verloc.

The Events of We Happy Few

While he's never seen in the Act, Arthur Hastings robs the Victory Memorial Camp and goes into the General's office to turn off the camp's power, so that Ollie can steal from them. Later, when Arthur meets Sally, she reveals that she is close with Byng, and that she can get a Letter of Transit for him this way.

Robert has been protecting Sally Boyle ever since he became her patron. When Sally meets Arthur, she offers to get him a Letter of Transit from the General, as they're close.

Sometime later, Robert enters her house while Sally is out, and she returns to discover that he has made himself at home. Sally tries to distract Robert with music and drugs in order to keep him from hearing her daughter Gwen crying. However, she passes out and finds that he has left her house while she was unconscious, and prays that he hasn't seen or heard Gwen.

Later, Sally goes to the Victory Memorial Camp to get the Letter for Arthur, in which Robert gives without hesitation, but also reveals that he wrote himself a note regarding Gwen. Sally tries to deny it but eventually admits that it is her daughter.

Robert figures that it's Anton's, and understands why she wouldn't tell him, though Robert is slightly peeved that she didn't inform him. Sally asks for help getting out of the city, to which he offers to smuggle Gwen out at the cost of Sally staying in Wellington Wells.

He then tries to kiss Sally, though she angrily rejects him. Robert raises his arm and almost hits her, but restrains himself, then comments on how she doesn't know what it's like being lonely, as she always has somebody by her side.

Sally decides to take Robert's Bristol Pilot boat in order to escape the town, and heads out to get the key to start the boat from Robert's secret safe house. However, while she does this, she's tranquilized by a dart.

When she comes to, she discovers that Robert has locked her down in the safe house, leaving them both with food for a year, all the while he plans to take back Wellington Wells, and keep Sally as his.

He attempts to get her to give up Gwen, as she obviously doesn't want her daughter to starve to death. Sally tries to seduce him again, only to hit him with a bottle of Scotch and run. She uses chemicals against him to knock him out before escaping.

Robert is confronted by Ollie Starkey, who wants to know his own involvement with the Germans. Robert confesses that he knew the tanks were fake, and that Ollie helped him with all of it in order to avoid the deaths of many. He claims that he and Ollie had the same conversation a year ago. Ollie says that the people of Wellington Wells need to be told the truth about the food shortage and ask Robert for help. Robert, however, insists that the Executive Committee would just reject it and kill him, and would then "pop a Joy." After Ollie threatens to get his daughter involved, Robert angrily yells at him and orders for his soldiers to kill Ollie.

Victoria Byng travels to see her father at the Victory Memorial Camp via the tunnels. Opening the secret bookcase passage, Robert is armed with a Lee-Enfield Rifle, thinking it's an intruder at first. Upon seeing Victoria he happily welcomes her, asking what brings her to see him. After telling him about the food shortage and plague, Robert is displeased and understands she's gone off her Joy.

He dismisses doing anything about the problem, stating that if they do something, the people will remember and kill each other for the last scraps of food left. He tells Victoria to distract the public with a Simon Says competition and to go back on her Joy. She goes against this and decides to go to talk to Dr. Verloc about his "permanent solution."

He later reappears after Victoria breaks out of prison, revealing he left the prison door open. He then reveals to her about his safe house, the one that he had saved enough food for a year. Victoria is shocked to learn that he'd done such, realizing that his 'Duty' is really just to save himself.

Robert rebuts, claiming their Duty now is to salvage whatever's left. He then plans to have the two of them to hide until the people have forgotten, then take his Bristol Pilot boat out of Wellington Wells to Ireland.

But Victoria refuses, and pushes him away whilst calling him a coward. He's never seen again after this, though it can be assumed that he's gone to meet with Sally at his safe house.

"You're as clever a liar as I am. You can lie with the truth."

"Do you remember the children born after the War? We got some of them out, but ... They made everyone so unhappy."

"You'll end up in one of Dr. Verloc's glass cells. And even I won't be able to save you."

"You don't know what it's like to be alone, do you? A girl like you never is."

"Sally. Do you love her? Or do you just love having someone who needs you?"

"I've done terrible things, Sally. I had to do them, but the mob despise me for it. I think I deserve a little consolation in my old age."

"Really? Would the good townsfolk of Wellington Wells have followed me into the machine guns? Or would they all have hidden in their basements?"

"The safest secret in the world is a secret no one wants to hear."

"The truth has too terrible a cost. Isn't that the decision we all made?"

"They'd tear me apart like starved jackals. And then they'd pop a Joy."

"Nothing is exactly what we must do. If our people realize they're running out of food, they'll kill each other for the last box of V-meat!"

"But a few people on top, doing their duty --us-- is the only thing that keeps us from savagery."

"But for God's sake, go back on your Joy! You'll only complicate things."

"Our duty now... is to rescue what we can. Salvage something from this whole rotten mess. Even if it's only two or three people."

"You obviously can't show your face until people forget!"

Concept art for General Robert Byng at his desk.

Robert next to the food he stockpiled.

Robert seen in We All Fall Down.

Robert on the ground. 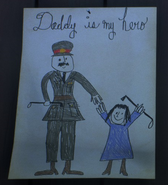 A drawing made by Byng's daughter Victoria, depicting them both together.

Retrieved from "https://we-happy-few.fandom.com/wiki/Robert_Byng?oldid=16623"
Community content is available under CC-BY-SA unless otherwise noted.