Fit in with proper decent sorts of people. Irritates the wrong sort, though.

Proper Suit is a craftable outfit in We Happy Few. It's a black two-piece suit made up of a suit and pants with white buttons and white outlines across many of its details. The Proper Suit has a white dress shirt and shoes, as well as a black necktie as accessory.

It is the signature outfit of Arthur Hastings, and it's also worn by many Wellies in the Parade District.

When playing as Sally, her version of the proper suit is an unusually stylish white vinyl dress with black outlines across it. Attatched to the dress are black sleeves.

The Proper Suit allows the player to move around Hamlyn Village and Parade District without problems. If worn in the Garden District, however, will anger the Wastrels. It's one of the first items Arthur and Sally has access to in-game.

Ollie cannot craft the proper suit and has to rely on other clothes to fit in. 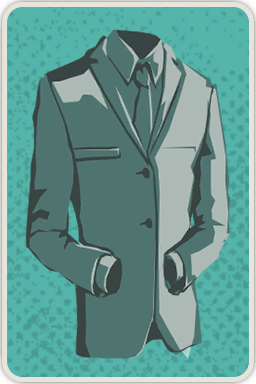 Early version of the Proper Suit 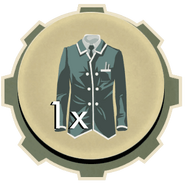 The Proper Suit in the crafting menu

A Wellie wearing a Proper Suit 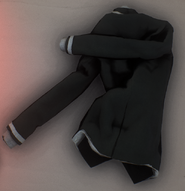 Item seen in game
Add a photo to this gallery
Retrieved from "https://we-happy-few.fandom.com/wiki/Proper_Suit?oldid=14354"
Community content is available under CC-BY-SA unless otherwise noted.