Percival "Percy" Hastings is the older brother of Arthur Hastings in We Happy Few.

Percy is almost identical to Arthur, from facial structure to hairstyle, the main differences being that he's older, taller, and doesn't wear glasses. Also, his hair is dark brown (his brother's hair is black) and a bit untidy. Percy speaks with a slight lisp, a deeper voice than young Arthur, and sometimes struggles to get sentences straight, having to repeat himself every now and then.

Percy only appears in the Arthur's flashbacks. The player will not actually meet Percy in the game.

Arthur remembers Percy at the beginning of the game upon seeing an article related to a competition that they won together as kids. Because of this, Arthur goes off his Joy and decides to escape Wellington Wells to go and find Percy.

As the game progresses, more and more about Percy is uncovered, including pieces of what Arthur actually did to Percy. By the end of Act One, Arthur, upon re-encountering the Constable, remembers everything he did, and is distressed by what he did. The Constable consoles Arthur and leads him out of Wellington Wells. 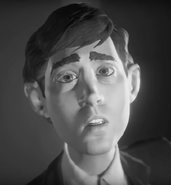 Percy from one of Arthur's occuring flashbacks

The front picture from the newspaper article about Arthur and Percy winning a scrap gathering prize together when they were kids.
Add a photo to this gallery
Retrieved from "https://we-happy-few.fandom.com/wiki/Percival_Hastings?oldid=13575"
Community content is available under CC-BY-SA unless otherwise noted.