Hurts less when people (and bees) hit you. You'll look a bit odd, though.

Padded Suit is a type of reinforced armor in We Happy Few, when worn it will protect the player from incoming damage from both people and bees. It conforms in the Garden District.

The Padded Suit reduces incoming damage received from attacks and bee stings by a moderate amount. In addition to that, while wearing the Padded Suit, the player will not be stunned when stung by bees, allowing them to carry out interactions without being interrupted.

The Padded Suit worn by Arthur and Ollie is a makeshift suit consisting of several pieces of cloth of varying colors and texture that have been crudely stitched together into two layers with padding in between to form a type of armor.

Sally's Padded Suit is a stylish padded suit that is white and black diamond patterned. She will also wear silver sequin gloves. Because Sally can't craft the outfit on her own, the player will have to buy one from Mrs. Pankhurst. 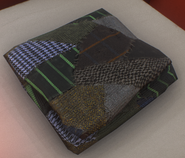 Sally's padded suit in game.
Add a photo to this gallery
Retrieved from "https://we-happy-few.fandom.com/wiki/Padded_Suit?oldid=14406"
Community content is available under CC-BY-SA unless otherwise noted.