Nick Lightbearer (real name Norbert Pickles) is a character in We Happy Few. He is a famous, if somewhat faded, rock star and celebrity idol in Wellington Wells. Sally Boyle was at one time his muse and he and his band, "The Make Believes" were responsible for making many famous and popular songs throughout their active career in the 1950s and early 1960s.

He is a reoccurring side character in the main campaign and is the protagonist of the Lightbearer DLC.

Nick Lightbearer is scheduled to lead the "Simon Says" game at St. Genesius Church but never arrives. This forces Arthur Hastings to go retrieve him, and he makes his way to Lightbearer's home.

Once Arthur is able to enter Nick's house, he discovers that Nick has become a washed-up emotional wreck, seemingly suffering from depression. This is evidenced by the countless piles of Joy Pills, Empty Glass Bottles, and Empty Pill Bottles strewn across the rooms of his house.

Arthur finds Nick in the living room, where he is sitting on the couch, holding a Motilene Power Cell in his hand and is rather down for the wear. He tries to distract Arthur about a swarm of nonexistant ducks in the other room, when this doesn't work he begins to ramble on about how his fans forgot him and how hard it has gotten to make songs.

Arthur attempts to sober him up with the idea of a bath and a cup of tea, which the rock star agrees with, but Nick is still dysfunctional from his substance abuse as he walks into the bathroom and "takes a bath" by filling the bathtub with water and stepping into it with all of his clothes on, still grasping the Power Cell.

Arthur begins questioning Nick about his behavior and tries to warn him about the Power Cell but when he does so Nick accidentally slips and drops the Power Cell into the bathwater, causing him to drop dead from the intense electric shock. This gives Arthur the idea to put on Nick's clothes, mask and hair to impersonate Lightbearer in order to commence the game of Simon Says.

Sally Boyle visits Nick's home in order to get a record for Helen Faraday, where she finds Nick lying in the Bathtub. She simply assumes that Nick fell asleep in the bath as she didn't see the accident taking place.

The Lightbearer DLC is what follows directly after Nick's death in the bathtub from Act I, where he resides in The Avalon Hotel for an upcomming concert. Virgil Dainty, Nick's ex-agent, is there to help guide Nick to remember what had happened to him and avenge his death, it is also with his guidance that helps Nick journey and redeem himself from Hell to Heaven.

Nick on the cover for Lightbearer. 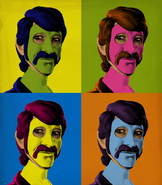 A pop art painting of Nick (inspired by the work of Andy Warhol). 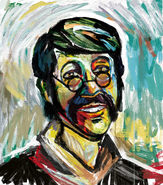 An expressionist painting of Nick (inspired by the work of John Bratby).

Add a photo to this gallery

Retrieved from "https://we-happy-few.fandom.com/wiki/Nick_Lightbearer?oldid=14865"
Community content is available under CC-BY-SA unless otherwise noted.