"You're right. You're always right."
— Ollie Starkey to Margaret

Margaret Worthing is a character in We Happy Few. She is constantly hallucinated by Ollie Starkey throughout the game, serving as a sort of companion.

Margaret Worthing was the daughter of Jack Worthing, who would later go on to become known as Uncle Jack. She was the same age as Arthur, and the two went to school together although it's probable that they weren't particularly close. She was a doll enthusiast. In 1946, she accompanied her father to fight in the Battle of Flowers and was promoted to Junior Field Commander. When the Authority Project came about, she was excited to go to Germany. Jack, however, couldn't imagine living without her and he thereby hid her. Ollie eventually discovered Margaret and turned her in. She fled, only to be gunned down by German soldiers. This would affect the lives of both Jack and Ollie. Her death was covered up and most think she just disappeared.

Jack would later bring Margaret up by accident in an episode of his show. He ultimately decided to rebel against the leadership of the city and tried to warn people about the food shortage, along with the need to stop taking Joy, and went berserk and smashed the camera, disappearing completely.

Meanwhile, Ollie, out of grief, asked Sally Boyle to make him a drug that would scramble his memories. After taking it, his betrayal of Margaret was forgotten by him. However, Margaret "came back." Ollie began to hallucinate her, perfectly aware that she was dead. He came to believe that she was his daughter and that Jack turned Margaret in. Margaret began to serve as Ollie's moral compass, and instilled him with new purpose, which was going against the flow of society. Isolating himself with Margaret in the train station, Ollie began to descend into madness.

Margaret serves as a companion in Ollie's storyline, often chastising him for his rash actions, acting in some ways as his moral compass and only friend. Ollie has built a shrine for her and has taken one of her dolls with him. When Arthur reveals to Ollie that the tanks were papier-mache, Margaret remembers that Ollie was Robert Byng's secretary, and begins to believe that he knew of the invasion being a scam. Ollie insists that he couldn't have forgotten something like that, and decides to head out to find Byng, all while the Headboys bomb the train station. Ollie eventually hears from Byng himself that he was an accomplice in the act, and Margaret becomes upset, while Ollie decides to reveal the truth about the food shortage to the population.

From there, Margaret and Ollie fight through Wellington Wells, solving some problems and creating even more of them. The two abduct Victoria Byng and starve her of Joy, but she ultimately escapes. Eventually, the two break into the Executive Committee's offices and make their way up to Uncle Jack's recording studio, only to discover that it has been abandoned. There, Ollie watches Uncle Jack's last recording and finally confronts his guilt over his hand in Margaret's death, and the fact that she was just his neighbor. From there, in an effort to make up for what he's done to Margaret, broadcasts the recording to all of Wellington Wells, and goes to the top floor to escape on a hot air balloon. Margaret tells him that he needs to let go of her, and, upon one last look at her picture, leaves Wellington Wells, finally free. In the Epilogue, Ollie is seen letting Margaret's photo fly away into the wind, at peace with himself. 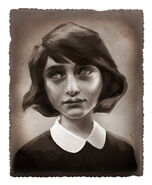 Margaret Worthing's character model.
Add a photo to this gallery

Retrieved from "https://we-happy-few.fandom.com/wiki/Margaret_Worthing?oldid=8512"
Community content is available under CC-BY-SA unless otherwise noted.