The Map is used to navigate throughout the islands of Wellington Wells. The Map is located between the Crafting and Quest buttons.

The map is obscured by mist and is only revealed when the player have gone around somewhere, meaning the player discovers things such as quests, pumps and safe hatches all on their own. The location of the player is shown as a triangle, with the tip of the triangle indicating where the player is heading.

The map is randomly generated on every playthrough and Act, meaning the layout and locations will be different every time. Though certain things may stay the same, such as Barrow Holm, Ravensholm, Ratholm and The Parade, which were made to be the same every time.

The map shows the current location the player is in, as well as a list of other noteable things for the player to discover. The player can also right click anywhere on the map to show a custom waypoint somewhere.

This list shows all noteable things on the map and their icon so that the player knows exactly what they're looking at, the player can check and uncheck the things they want to see.

If zooming out far enough, all icons will become white dots, except for Track Access Hatches, Encounters and black Points of Interests.

The player can click on any of the Track Access Hatches to fast travel to that location, so it's best for the player to memorize the names of the islands and where that track appears on so that they don't end up somewhere they didn't want to be.

It is important to note that certain things will not be located on the map, set pieces such as abandoned fountains, graveyards, german duds, and the likes, won't show on the map.

There are many oddities for the player to find on their own, especially in the Garden District.

Early Map design by Sarah Hamilton, was immediately shut down by the programmers for being too abstract.

Middle, the Village of Hamlyn.

Holm of Uskglass, Act I. 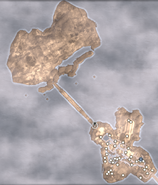 The whole appearance of Britannia Bridge in Act I, console commands were used for full display.
Community content is available under CC-BY-SA unless otherwise noted.
Advertisement