Jubilator is a large man-controlled vacuum vehicle designed to suck up the dead corpses off the streets of Hamlyn Village.

Jubilators are giant, white, teapot-esque vehicles that patrol the streets of St. Georges Holm during the night. The coloured lights around the vehicle will change depending on a few circumstances, it will be turqoise when neutral, yellow when noticing the player and red when aggrovated. The player will also be able to hear music coming from the Jubilators.

During the DLC, They Came From Below, it's revealed that Dr. Faraday was ordered by the Executive Committee to come up with a vehicle that would get rid of the dead bodies piling up on the streets as the Doctors refused to clean them up anymore.

Arthur will not encounter a Jubilator until he reaches St. Georges Holm. There he will have to go through the story quests, I Sing the Body Electric and The Great Stink. During the quests, Arthur will ride in a Jubilator while going down a tunnel for a brief moment before eventually crashing it.

He will later wake up in the Jubilator Maintenance Facility, there he will be chased down by Thomas Horner, an underground worker who is going after his colleague, Peter Thump. After activating all three switches in the area, he will find Thomas attempting to run over his colleague with the Jubilator, after the cutscene ends Arthur has to defeat Thomas, after which he is rewarded with a note from Peter.

Jubilators will patrol the streets of St. Georges Holm.

Jubilators will patrol the streets of St. Georges Holm.

Jubilators are difficult to defeat as they don't get hurt by anything other than electrical/fire weapons, such as the Electric Truncheon or The "Spitfire". When approached, the Jubilator will spin and knock the player over as it emmits Joy in gas form from the tube, causing the player to take in a low amount of Joy in their system.

It is best to attack the Jubilator with a Shock Grenade, as it is a throwable weapon and is also a one-hit-kill for the vehicle. Alternatively the player could simply run away from them as they are rather slow. 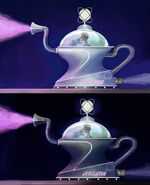 A white and black version of the Jubilator.

The animation for the underground worker dying inside of a Jubilator.
Add a photo to this gallery
Retrieved from "https://we-happy-few.fandom.com/wiki/Jubilator?oldid=11057"
Community content is available under CC-BY-SA unless otherwise noted.