Joy Detectors are various special devices in We Happy Few, meant to detect whoever hasn't taken their Joy. Joy Detectors come in various forms, and their ways of detecting Downers vary.

To bypass Joy Detectors, the player must either take Joy, or Sunshine.

Joy Detectors were built by Dr. Faraday as a way to detect any Downers roaming about in Hamlyn Village, during the events of They Came From Below DLC, Faraday uses some of the robotic parts of her robot servants to invent bigger and better Joy Detectors and other machinery.

The player will come across various kinds of Joy Detectors as they traverse Hamlyn Village and the Parade District.

Downer Detectors are devices with either one or multiple glowing yellow beams that turn red if the player walks through them without any Joy in their system, an alarm will go off and any nearby Spankers will charge up to electrify the player, any nearby Wellies will also aggro onto the player.

In order to deactivate these, the player will have to find a nearby control box, follow the yellow cable connecting the two.

The giant Downer Detectors that block some roads are called "Beefeaters". Beefeaters in Maidenholm do not have tall spankers nearby, but Beefeaters in St. George's Holm do.

Headmistresses are giant robots with the appearance of a woman, they remain stationary in large circular parks. One appears in St. George's Holm, and two in the Parade District.

If the player gets close to the headmistress without any Joy in their system, they will give them three seconds to move away from the area before summoning an electric circle around the player in an attempt to stun them while Wellies and Bobbies aggro onto them. They can only be deactivated in the Parade District via control boxes.

Peepers are drones that will see if the player does something wrong. They only come out during the night, though some will appear at Nick's Fab Pad, and Earl of Sandwich Park.

Peepers are higher off the ground and can therefore get a better view of the player, they'll charge up their in built spanker and electrify the player if they're spotted. They can be damaged by any ranged weapon, such as Darts, Glass Bottles or even Bangers. Do note that only the balloon part of the Peeper is damageable, so if the ranged weapon hits the metal part it'll only bounce off.

Spanker is the name of the electrical charger that shocks, or 'spanks', nearby Downers.

TV-spankers are, as the name suggests, TV screens of a smiley face with an in-built spanker charger on its head. It'll detect whoever isn't on Joy, give them 3 seconds to leave its detection radius before charging up the spanker and electrocute the individual. They cannot be turned off, unless they're connected to a control box.

Another version of the TV-spanker appears during We All Fall Down, able to scan the area from right to left, and will only shock the player if they're spotted in its headlight.

Conductors are the most common form of Spankers in Hamlyn Village, usually found either attached to walls and roofs, or on tall pillars. They tend to be activated through alarm systems, such as when passing through Downer Detectors, or a Revolver. Because of this, the conductor itself cannot be deactivated, but the device it's attached to can.

A conductor will charge up 3 times before electrocuting the player, 4 times if the player isn't nearby. Note that it'll immediately shock the player once they enter its radius.

Intelli-spankers can only be found in the Parade District, specifically during the quest, House Call. They're essentially the same as the TV spankers.

Revolvers are small booths that the player can enter and exit to reach another area. When inside, the player will be scanned by a device that'll let the player pass no matter if they're on or off Joy. However, if the player isn't on Joy, they'll alarm the area and alert nearby Wellies and Bobbies, while also activating Spankers.

Revolvers only show up on Bridges for the player to pass through to reach another island, though one will appear by the quest, Sum of the Parts. 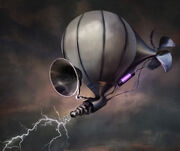 Concept art of the Peeper, by Whiteney Clayton.

Early Concept of the TV spanker.

Early concept art of the Headmistress.
Community content is available under CC-BY-SA unless otherwise noted.
Advertisement