Harold Ridgwell is the Director of the Wellington Wells Health Institute in the Parade District. His portraits depicting himself can be seen throughout the building, as well as a statue of himself.

In his office a statue of Dr. Verloc overturn vandalized reading "Fuck Verloc" can be seen. Meaning he and other Doctors plan to overthrow him at some point.

Events in We Happy Few

Arthur steals the access keys from Ridgwell's office and must avoid the doctor to prevent the alarm being set off.

Through various notes the player can gather, it's evident that Harold holds great distaste towards Anton Verloc. He is also very strict towards his students and other staff. 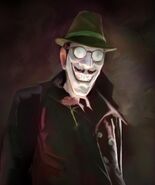 Harold Ridgwell's portrait.
Add a photo to this gallery
Retrieved from "https://we-happy-few.fandom.com/wiki/Harold_Ridgwell?oldid=15204"
Community content is available under CC-BY-SA unless otherwise noted.