Hamlyn Village, commonly referred to as The Village, is one of the three main districts of Wellington Wells, where the middle class Wellies live. It has less security than the Parade District, where the upper-class Wellies live, but it's far more secure and modernized compared to the Garden District.

Wellies can often be seen jumping in puddles, playing patty-cake, and greeting one another.

Bobbies patrol the streets and guard certain zones for non-public access. Hamlyn has a variety of locations such as stores and parks.

Based on historic Tudor buildings, the Village is a lovely place full of color and fun. The Village consists of rainbow roads with tons of houses, parks and alleyways adorning the streets. Most of the houses and shops have been abandoned, so the inhabitants of the Village painted the boarded up non-interactive buildings to look like the residents have simply gone on holiday.

There are loads of Joy Booths scattered throughout for the player to use in case they want to take Joy, as well as TVs hanging above ground that broadcast Uncle Jack's shows on a daily basis. There are a few corners which sport security consisting of Downer Detectors that completely block off the road forward, unless the player has a Joy or Sunshine to spare.

The Wellies are very keen to keep Downers and Wastrels out of their sight, willing to go as far as to chase the Downers down and vigorously beat them until they take their Joy, or until they're dead. There's a multitude of security placed on the streets and inside of houses to prevent Downers from coming very far.

Joy is the drug that the proper citizens of Wellington Wells take on a daily basis, it helps them forget anything and everything that may have occurred a moment ago, this is proven to be quite a cause for concern as many residents have reported forgetting about completing basic functions such as brushing their hair, if they remembered to put on their Happy Face Mask on in the morning or to remind themselves of never cooking with sawdust again.

The local delicacy is Victory Meat, and most food items such as sandwiches, pies and stews are made with V-Meat. Despite this, the Village is suffering from a food shortage, due to supplies not being imported to Wellington Wells anymore. The food shortage will eventually become such a dire problem that the residents begin eating charcoal to substitute for their starvation. (As seen in We All Fall Down)

During the night, certain parts of the streets will be contaminated by a toxic fog, and the law enforcement will be on patrol as there is a nocturnal curfew set in stone. Bobbies and Peepers will patrol the streets, and any citizen found wandering about at night will get a jolly good thrashing.

In order to conform with the rules set in Hamlyn Village, the player must wear any of the following clothes:

Wearing anything else will raise suspicion from NPCs and eventually cause them to become hostile.

The player may not break curfew, hit something or someone, be found going through Withdrawal or Memory Loss, sneak, stare, shove, run, jump, steal, trespass or wield a weapon.

If the player unlocks the 'Oh you' skill, they will be able to stare, sneak, run and jump without it bothering the residents.

The proper citizens of Wellington Wells, they spend the entirety of their lives in a drug-induced state of euphoria, with them seeing the world as bright, vibrant and colorful. They are found socializing with other wellies, drinking tea, playing patty-cake, jumping in puddles, and much more. See more information on their respected page.

The little old ladies that are only found in Hamlyn Village, they are fond of tea and snooping. See more information about them on their respected page.

The law enforcement of Wellington Wells, they are the taller and stronger than your average Wellie. They all seem to have Cockney accents, and are always "endeavoring to ameliorate their vocabulary." See more information about them on their respected page.

Tall and lanky with a vulture's posture, the Doctors can easily sniff out Downers because of their keen sense of smell, though they can't distinguish if the Downer in question is high on Joy or Sunshine. See more information about them on their respected page.

A gang of thugs who beat up weaker Wellies for fun, they sport leather jackets over white turtlenecks, sunglasses, pompadours. They are the only NPCs who wear jeans, and some even wear motorcycle helmets. See more information about them on their respected page. 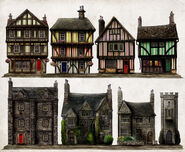 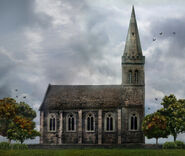 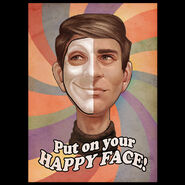 Posters found throughout the Village, all were made by Sarah Hamilton.

Community content is available under CC-BY-SA unless otherwise noted.
Advertisement