Gwen Boyle is a character in We Happy Few. She is the infant daughter of Sally Boyle, and serves as a game mechanic as well for Act Two.

Gwen is a small infant wrapped in a purple blanket. Only her head is ever visible, as her body is always in the blanket. She is chubby (usual for a baby), has blue-green eyes as well as brown hair, and has freckles spread across her face.

Gwen is first heard crying upstairs after an angry client of Sally's bursts into Sally's home and knocks her out. Shocked by the discovery of the baby, Spud becomes increasingly unstable, believing that Gwen is a rat that he is hallucinating as a baby. He raises her above his head to smash her down, only for Sally to inject him with a knockout syringe and snatching the baby from him as he falls to the floor.

From there, Gwen becomes a game mechanic, requiring to be fed at certain times throughout the act, and is a source of constant stress for Sally, fearing that Gwen will starve to death or will be discovered and experimented on or killed. Eventually, Robert Byng enters Sally's house uninvited, where Sally plays music and seduces Byng in order to keep him from paying attention to Gwen's crying. Sally eventually passes out from a high and discovers that Byng has left the house on his own.

Later, Sally discovers that Gwen has the measles, and goes to Anton Verloc for help first, but he angrily rejects Sally. Sally becomes increasingly distressed and makes a deal with Arthur Hastings by getting him a Letter of Transit in exchange for a bottle of cod liver oil, which can treat Gwen. Sally goes to Byng for the letter, which Byng gives, but he reveals that he wrote down a note to himself reminding him that Sally has a baby. He figures that the baby is Verloc's, to which Sally answers with a silent affirmation. The two discuss getting Sally and Gwen out of Wellington Wells. Byng is willing to get Gwen out of the city, but refuses to let Sally go, leading her to angrily rejecting him.

Sally reconvenes with Arthur and tries to leave with him, even revealing Gwen's existence to him, but Arthur decides to abandon her. From there, Sally tries to escape with Gwen on her own. Eventually, Byng captures Sally in his safe house, and the two argue whether or not Sally can protect Gwen, and states that she will reveal her location to him to prevent the baby from starving. Sally eventually escapes and makes her way back to Gwen, only to find that a Joy Doctor has broken into her house, and he hears Gwen crying. Sally then knocks him out, and makes plans to smuggle Gwen out of the city via Byng's hidden motor boat. The two escape the city, and Sally proclaims that they will be the "Two Musketeers."

Gwen is briefly seen again with Sally in the boat, approaching land. 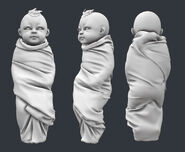 Spud Murphy holding Gwen.
Add a photo to this gallery

Retrieved from "https://we-happy-few.fandom.com/wiki/Gwen_Boyle?oldid=12776"
Community content is available under CC-BY-SA unless otherwise noted.