Low
Small chance to cause bleeding

This bottle is useless without a cork, but is smashes real nice.

Glass Bottle is a throwable weapon and gadget in We Happy Few. It is a simple colorless transparent glass bottle with a blank, grayish-yellow label on one side. It will have a gilded bottle cap when wielded by the player, which will imeediately disappear once thrown.

When wielding the glass bottle, the player will automatically aim at the closest target, although one can also manually aim their throw at a desired location by holding down the attack button.

When manually aiming, the game will display a red laser-like line that shows the trajectory of the throw, with a white reticle showing the point of impact. If the throw is aimed at an NPC; they will be highlighted by a white outline, even through walls.

The glass bottle, like other throwables, can also be used to trigger tripwires from a safe distance.

Glass bottles are necessary if the player wants to obtain Strange Alcohol.

Glass Bottles can be found in a lot of places, including in Rubbish Bins, Rubbish Piles, inside loot containers and sometimes they can be found as loose items on the ground. Drinking Scotch or Strange Alcohol will also yield the player a Glass Bottle.

Although Glass Bottles can be found almost anywhere, they are somewhat more common in the Garden District. 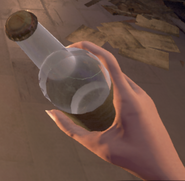 Bottle in hand.
Add a photo to this gallery
Retrieved from "https://we-happy-few.fandom.com/wiki/Glass_Bottle?oldid=10550"
Community content is available under CC-BY-SA unless otherwise noted.