Foggy Jack is a mysterious serial killer in Wellington Wells. In We Happy Few, his existence is debated on among the citizens, him being seen as a legend. In the Lightbearer DLC, he is confirmed to be real, much to the distress of Nick Lightbearer.

From what is known about Foggy Jack in the main game, witnesses have described him as resembling Uncle Jack, practically identical in shape and size. However, as witnesses have mainly (and perhaps only) seen him in the fog, there isn't much more that can be said of him, other than that he has been heard quoting lines from some of Uncle Jack's shows.

In the Lightbearer DLC, Foggy Jack is depicted as a (mostly) normal-looking wellie but with a chrome finish and reddish eyes on his metallic mask, a stylish black suit and a hairstyle resembling that of Anton Verloc, albeit light brown instead of white. His voice and (highly likely) mannerisms appear to be nearly identical to that of Uncle Jack's. His weapon of choice is a cleaver.

In Constable Burne-Jones' suite, his crime wall has many notes regarding the killer:

Who's the happiest of men
When he's slicing through an abdomen?
Foggy Jack's coming to play!

Entrails and vittles!
Please put on the kettle!
Foggy Jack's coming to stay!

Last Sightings Evidence Linked? What We Know So Far Edit

There never was anyone named Foggy Jack!
He never in mists of the night did attack!
If some folks turned up dead
with their guts spilling red
then it must have been some other hack! (repeated 3 times)

At an unspecified point in Wellington Wells, several people began "going on holiday," or in other words, were killed. However, unlike most other cases of murder, the victims had been brutally hacked to pieces. In addition to this, witnesses who saw what was believed to be the suspect claimed that he bore a great resemblance to Jack Worthing, though he was shrouded in fog. They also reported having heard him quoting episodes from various Uncle Jack shows.

Arthur can discover the Final Issue of the 'O' Courant, which brings to light many of the town's problems, among them Foggy Jack. The article goes on to describe the state of his victims, who (as stated above) were all found in pieces. It also, interestingly enough, mentions that Uncle Jack's current episodes are all reruns and suggests that something could have happened to him.

Sally never interacts with anything related to Foggy Jack, although many Wellies continue to mention him and when fast-traveling through the dark tunnels of the Wellington Underground, Sally often comments about how she is glad that Foggy Jack doesn't live in said tunnels.

When Ollie and Margaret try to get into Maidenholm from the Garden District, a Bobby demands that Ollie figure out what happened at a nearby location to a patrol of Bobbies, who were all killed by an unknown perpetrator. Ollie and Margaret discover that all of the dead Bobbies had their gas masks tampered with, and they were then locked in a gated area and killed by a mustard gas bomb.

Ollie then finds a note locked in a chest that says "We're coming to the end of our time." Upon returning to the Bobby, Ollie tells him what happened, and reads him the note. The Bobby, in horror, deduces that this was the work of Foggy Jack, and asks Ollie to keep quiet in exchange for entry onto Maidenholm.

Nick Lightbearer comes into contact with Foggy Jack in person during what appears to be a drug-induced hallucinatory episode. Foggy Jack reveals that he has been killing off people to get Nick to write him a song.

Nick, who is in danger of being framed for the murders, refuses to do so and Foggy Jack traps him in the maze outside of the hotel. Foggy Jack threatens to wear his face to the Nick Lightbearer Lookalike Contest and will kill everybody when the lights go out.

Nick manages to escape and engages in a one-on-one battle with Foggy Jack, which Nick had won. It is unknown if Jack was killed during the battle or simply knocked unconscious, nonetheless, he was taken by the police. 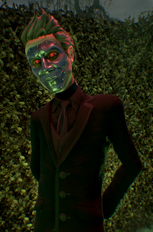 A close up of Foggy Jack's face.
Add a photo to this gallery

Retrieved from "https://we-happy-few.fandom.com/wiki/Foggy_Jack?oldid=13481"
Community content is available under CC-BY-SA unless otherwise noted.