Fireplaces are structures made out of stacked, burning logs. There are three different kinds of fireplaces found in We Happy Few, all of which can contain various kinds of items.

There are three kinds of fireplaces, one that is referred to as a Campfire, it is a medium structure of rocks in a circular formation, three branches that hold up two buckets and a pile of burning logs underneath.

The next one is referred to as Ashes, these are simply a pile of logs that has been extinguished.

And lastly, the Fireplace, which is a modern white fireplace with burning logs inside.

Campfires can either be found out and about on the streets of the Garden District or inside of Wastrels Houses.

Fireplaces are more commonly found inside of the houses in Hamlyn Village, often times with a note or two taped on it.

And Ashes can be found in both of the houses in Hamlyn Village as well as the Garden District.

Ashes as seen in game. 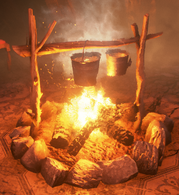 A Campfire as seen in game.
Add a photo to this gallery
Retrieved from "https://we-happy-few.fandom.com/wiki/Fireplace?oldid=11701"
Community content is available under CC-BY-SA unless otherwise noted.