Dressers are wooden pieces of furniture that can be found throughout various houses in Wellington Wells. They contain various kinds of useful items.

There are four kinds of dressers found in Wellington Wells.

Small Dressers are medium sized wooden dressers with four drawers, they appear to be very rugged and dirty.

Low Dressers are rectangular wooden dressers with six drawers, they are very low to the ground.

Dressers are medium sized wooden dressers with four drawers, they tend to have a white frame around it and are generally very clean and modern.

Vanities are white dressing or makeup tables with a large mirror in front.

Small Dressers are only found in the Garden District, they can appear in Wastrel's houses, Abandoned houses or in other ruined areas.

Dressers and Vanities are only found in Wellie's houses.

Some of these items can be found ontop of the furniture as well. 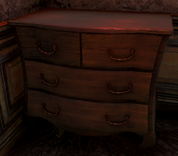 A Dresser in the Garden District.

A Low Dresser in the Garden District. 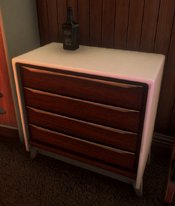 A Dresser in Hamlyn Village.

A Vanity in Hamlyn Village.
Add a photo to this gallery
Retrieved from "https://we-happy-few.fandom.com/wiki/Dresser?oldid=12181"
Community content is available under CC-BY-SA unless otherwise noted.