Dogberry Park is a "lovers park" for couples in St. George's Holm and Maidenholm.

Within the park there is a small lake and a fountain with a statue of a man sitting on the ground with a woman laying on his knees with a big heart behind them. Benedick Keyes and Beatrice Gates can be found there.

Goodbye To All That - Act ll

There is a Dig Location by the corner of the park.

The statue in Dogberry Park. 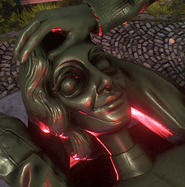 What the hair looks like underneath.
Add a photo to this gallery
Retrieved from "https://we-happy-few.fandom.com/wiki/Dogberry_Park?oldid=12802"
Community content is available under CC-BY-SA unless otherwise noted.