Desks are work tables that contain various kinds of valuable items in We Happy Few. Some desks require a lockpick to be opened.

There are four kinds of desks found throughout Wellington Wells.

Two kinds of desks can be found inside of Wellie's homes. One that is entirely white apart from seven red wooden drawers, and the other is entirely wooden but with a dark green surface.

One kind of desk can be found inside of facilities, such as the Wellington Wells Constabulary and The Hamlyn "O" Courant Newspaper Office. These desks are all modelled the same but have different colors, the colors come in yellow, red and white.

One kind of desk is found throughout the Garden District, though they only appear in special locations such as The Train Station and Shelters. These desks are entirely wooden like the ones in Hamlyn Village, though they are more worn out and dirty.

Note that some items can be found on top of desks as well.

Desk in the Garden District. 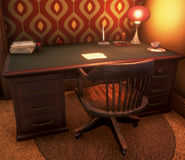 Add a photo to this gallery
Retrieved from "https://we-happy-few.fandom.com/wiki/Desk?oldid=11343"
Community content is available under CC-BY-SA unless otherwise noted.