Who knows what this does? Not me.

The Curious Device is a device that the player comes across during Act l of We Happy Few, though the only time they'll get to use it is during the They Came From Below DLC.

Ollie gives Arthur the curious device inside of the old Train Station in Eel Pie Holm so that he can cross Salamanca bridge and move on to Hamlyn Village. The device is meant to make it seem as if he's an undercover bridge inspector, which the Bobby believes.

They Came From Below DLC Edit

During the second part of the DLC, Roger comes across the "Activator" Test Chamber, in which the Curious Device is used to destroy the robots placed inside of four rooms.

From there, the player will be given obstacles they'll have to get past to advance in the game.

In the DLC, the device uses telekinetic electronic waves to move structures around, it needs to be held in close proximity to the Curious Panels in order to be activated, though when the electronic waves are in use, the player can move as far away from the Panel as they want.

Arthur claims that it detects "structural irregularities" using shortwave radar, though it can be assumed that this is only guess work on his part. 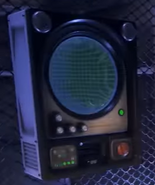 The Curious Panel.
Add a photo to this gallery
Retrieved from "https://we-happy-few.fandom.com/wiki/Curious_Device?oldid=12463"
Community content is available under CC-BY-SA unless otherwise noted.