Patrolman of the Boundaries

Chief Inspector Peters, is a major character in We Happy Few, and is a figure from Arthur's past.

Chief Inspector Peters is a high-ranking Bobby, standing out among them given that he is far older than the rest (as well as being much shorter). He also has a checkered strip on his helmet. His hair is grey and he sports a mustache. When he was younger, he had brown hair.

Chief Inspector Peters was one of the policemen responsible for making sure that the children of Wellington Wells would board the train. A young Arthur Hastings tricked him into believing that he was too old by using his brother Percy's ID, and though the Constable seemed suspicious, he decided that he wouldn't send an extra child to Germany, effectively saving Arthur's life.

In addition to this, the Chief Inspector found that Sally Boyle had run away from home, and decided to take her back, promising to put a good word in with her mother. However, he discovered that Mrs. Boyle poisoned herself and the rest of the family, leaving Sally as the sole survivor. He attempted to keep Sally from seeing this by telling her to go to the station, but she pushed past him and discovered the horrible truth.

Arthur Hastings has various flashbacks of Chief Inspector Peters throughout the game. Eventually, he encounters the Chief Inspector while in a police station, who recognizes Arthur and calls him Percy, while Arthur doesn't completely recognize him as he's masked. At the end of the game, on the bridge, the Chief Inspector confronts Arthur to get his Letter of Transit, and removes his mask, proclaiming that it is itchy. Arthur recognizes him and then remembers what he did to Percy. The Chief Inspector consoles Arthur to an extent and proclaims that while he can't be forgiven for what he has done, it is a gift that he remembers and knows who he is, and that the mercy in the world is that life goes on. He then begins to escort Arthur across the bridge.

Sally Boyle, when returning to her childhood home, experiences the memory of Chief Inspector Peters finding and escorting her home, only to discover the tragedy in her home. Sally then experiences a vivid hallucination of her home, with her dead family in it, along with the Chief Inspector watching from the side and consoling Sally.

In the Epilogue, as they continue to walk across the bridge, Arthur continues to think about his actions, and laments to Constable Peters how heinous he really is. The Constable then notes that some people are better prepared or built to handle the consequences of their actions, while Arthur questions if he really is a constable; The Constable responds rather enigmatically that he "patrols the boundaries" between Wellington Wells. The Constable then offers Arthur the choice to take an Oblivion pill and forget, or to remember and carry on.

If Arthur chooses not to accept, the Chief Inspector puts it away and lets Arthur finish his journey on his own.

If Arthur chooses to forget, the Chief Inspector gives him the Oblivion, and Arthur forgets the events of the game and heads back to Wellington Wells.

Concept art for a younger Constable Peters, by Whitney Clayton. 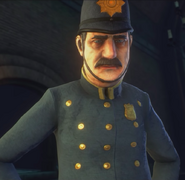 Chief Inspector Peters at the Boyle House in Sally's flashback.
Add a photo to this gallery

Retrieved from "https://we-happy-few.fandom.com/wiki/Chief_Inspector_Peters?oldid=14238"
Community content is available under CC-BY-SA unless otherwise noted.