Actually, the third little pig just threw bricks at the wolf until he died.

Just the right size to throw.

Bricks and Spiky Bricks are ranged weapons that are mainly used against enemies. While they aren't particularly damaging, over time the target who is continuously hit with bricks will become more and more injured. Enemies can also throw bricks.

Bricks are commonly found in the Garden District, though they can also be found inside of buried Chests.

At the end of the quest, Speaker's Corner, there will be loads of bricks and spiky bricks on the ground for the player to retrieve if they so please. 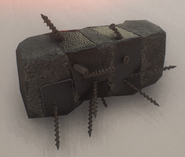 Weapon seen in game.
Add a photo to this gallery
Retrieved from "https://we-happy-few.fandom.com/wiki/Brick?oldid=11118"
Community content is available under CC-BY-SA unless otherwise noted.