Hamlyn Village and The Parade

Fit in among workers and raise no suspicion when "fixing" traps.

Wear to conform in construction areas and municipal facilities.

The Boiler Suit (British English for (c)overalls) is a craftable outfit in We Happy Few.

It is a somewhat greyish dark blue jumpsuit with two large chest pockets, a similarly-colored belt and brownish-yellow gloves as accessories. The emblem of Wellington Wells is emblazoned onto the left-hand-side pocket.

The Boiler Suit can be obtained either by crafting it or by buying it from the Shady Dealer.

Aside from having a different appearance, the Boiler Suit is otherwise identical to the Proper Suit in that it allows the player to move around in Hamlyn Village and the Parade District without arising suspicion. Likewise, if worn in the Garden District, it will anger Wastrels.

The Boiler Suit differs from the Proper Suit, however, in that it is also the standard uniform for Council Workers and if the player wears one, everyone will assume that they are one, thanks to Joy. In practice, this allows the player to use Shortspikes, Polarity Devices, and Electro-Lock Shockers on Control Boxes and other machines without raising any suspicion.

In addition to that, when playing as Ollie Starkey, the Boiler Suit will replace the Proper Suit in the crafting menu, making it the only outfit that Ollie can craft that allows him to move around in Hamlyn Village and the Parade District. 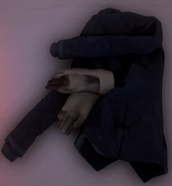 Item seen in game
Add a photo to this gallery
Retrieved from "https://we-happy-few.fandom.com/wiki/Boiler_Suit?oldid=13393"
Community content is available under CC-BY-SA unless otherwise noted.