Start a Wiki
Beatrice Gates is a wellie residing in Maiden Holm, she can be found in Dogberry Park alongside Benedick Keyes on a bench. Benedick is constantly trying to win the hearts of Beatrice, though she doesn't share his feelings back.

Arthur sneaks behind the bushes watching Benedick attempting to kiss Beatrice, only for her to slap on him in the face. He breaks down crying as she runs off to another bench, this is where Arthur can either continue the quest or go and talk to Beatrice for some extra hidden dialog, he won't be able to get this piece of dialog from her when the quest is over.

Arthur gives Benedick flowers and hides behind the bushes whispering what he should say to Beatrice. Benedick messes it up, but after begging her she gives in and agrees to be with him. Benedick thanks Arthur and gives him the recipe for Mojo.

Side Quest: Goodbye To All That.

Beatrice isn't seen in Act II, though Benedick is found telling Sally that he isn't sure if Beatrice really loves him since she says she loves everything. Once Sally gives in and hands Benedick Sunshine to use on Beatrice.

The next day Benedick is found crying behind the big statue in Dogberry Park, he will tell Sally that Beatrice only talked about a childhood sweetheart who made quite the impression before leaving on the train to germany. She also said that she only stayed with Benedick to avoid the unpleasantness of breaking it off. 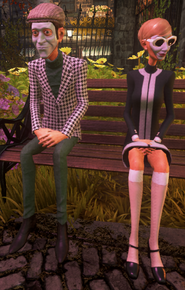 Beatrice and Benedict on a bench in Dogberry Park.
Add a photo to this gallery
Retrieved from "https://we-happy-few.fandom.com/wiki/Beatrice_Gates?oldid=12801"
Community content is available under CC-BY-SA unless otherwise noted.