Start a Wiki
"Quiet Zone!"
This article contains Removed or Unused content that is not part of the game anymore.

Banger is a throwable weapon in We Happy Few. It is an improvised hand grenade consisting of a drinking canteen filled with explosives, with a leather sling and several screws drilled into the top of it, acting as detonators.

When wielding the Banger, the player will automatically aim at the closest target but one can also manually aim their throw by holding down the attack button When aiming a throw, the game will display a red laser-like line showing the trajectory, with a white reticle showing the point of impact. If an the throw is aimed at an NPC, they will be highlighted by a white outline, even through walls.

Once thrown, the Banger will travel along a set trajectory until it impacts a surface or an NPC. When it hits something, it will explode, causing high damage and possible inflicting bleeding to anything caught in the blast radius, with the damage decreasing the further the target is from the impact. If the player is caught in the blast radius, they will suffer self-damage.

Bigger Banger is a more powerful variant of the normal Banger. It differs from the normal version in that its primary payload, Black Powder has been replaced with the much more powerful Trinitrotoluene (TNT), resulting in a bigger explosion.

The Bigger Banger behaves identically to the normal Banger, save for its higher damage, making it more powerful in combat, but also more dangerous in the hands of an enemy.

Berserk Bomb is a type of banger that makes every NPC nearby go berserk and attack whoever is not berserk, including the player. It doesn't inflict any damage on the targets either, as the damage is meant to come from the berserk NPCs.

Vomit Bomb is another type of banger that the player can either craft themselves or find in chests and other areas in the game. It will not inflict any damage on the targets when used, but it will cause them to stop in their tracks and thow up, allowing the player to escape safely. The player will not be inflicted by the bomb.

Smoke Bomb is a version of the banger that Doctors use against the player. When used, it will emit a very small white cloud. Despite what the description says, the player will not actually get anything from walking into it. It can, although rarely, be found on Doctors corpses.

Crash Bomb is an unused version of the banger that the player was meant to be able to craft and use against Wellies, when thrown it will emit a large black cloud that makes every wellie, Bobby and Doctor break into tears for a while. It is only accessible through console commands.

All of the bombs are listed under the Weapons category in the crafting menu, it depends on the character if they can craft them from a workbench or chemistry set. 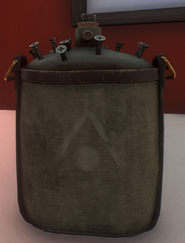 Bigger Banger (front) and Regular Banger (back) seen in game.

Crash Bomb seen in game.
Add a photo to this gallery
Retrieved from "https://we-happy-few.fandom.com/wiki/Banger?oldid=12492"
Community content is available under CC-BY-SA unless otherwise noted.