We Happy Few
We All Fall Down

Dr. Anton Verloc is the director of Haworth Labs in Wellington Wells and an antagonist in We Happy Few.

Unlike all other Wellies, Anton does not wear a Happy Face Mask, nor does he take Joy.

Born in 1926, Anton Verloc lived in London until 1940 to escape the Blitz. He moved to live with his uncle and would've been fourteen at the time. After his uncle's death in 1954, Verloc inherited his house at the age of twenty-eight.

Dr. Verloc became the head of research and development on Joy drugs and their effect on the population by getting rid of his superior, Harry Haworth. He conspired with General Byng to remove Haworth and take his place in 1957. At this point Verloc was just a research chemist on Harry's team. Haworth was reported "gone on holiday."

Sally Boyle had worked for Dr. Verloc as a pharmaceutic assistant, while the two also shared romantic feelings for each other. But she left him upon discovering she was pregnant. She knew she couldn't trust him with her baby, as he was abusive towards her. He became bitter and hateful after she left him, but he never found out about the baby.

In an attempt to synthesis new ingredients for Joy, his team ended up creating mutated mushrooms which spread throughout the Garden District and began the Plague. He also authorized sending waste materials and bad batches of Joy into the rivers, causing mass pollution and a toxic fog that rises from the river.

Events of We Happy Few

Arthur goes to the Haworth Laboratory to get cod liver oil for Sally. There, it is revealed that Verloc plans to release the "permanent solution," an even stronger version of Joy that will make the population permanently happy, with the side effect of them becoming mindless drones. Arthur tries to trick the White Bobby into letting him see Verloc, but Verloc figures out that Arthur is a "spy" and tells the Bobby to kill Arthur.

After beating the Bobby, Arthur confronts Verloc with his plans and how it's wrong to lobotomize the population, but Verloc laughs him off and tells Arthur that he can and will implement the permanent solution. Arthur then attempts to throw the permanent solution's latest version at Verloc (who exclaims that it will drive him mad), but Verloc hits a button that paralyses Arthur with electricity. Verloc then hops in a Popper and escapes.

When Gwen gets measles, Sally goes to Verloc to get him to give her cod liver oil, but he is still furious with her and tries to get the constabulary to arrest her. They let her go, however, as Sally is under the protection of General Byng. She then turns to Arthur for help.

Later, after Sally escapes from Byng, a Joy Doctor under Verloc's command has been sent to investigate Sally's home, to investigate "strange noises" heard by her neighbors. He hears Gwen, and realizes that she's keeping a baby in her house. Sally knocks him out and escapes Wellington Wells, with Gwen in tow.

Despite having escaped Arthur, it's quite apparent that Verloc's power (along with his safety) is in danger. It is implied in various sights, conversations, and notes that Verloc is losing control over the Joy Doctors, many of whom seem to view him as an incompetent fool.

The Doctors who work in the Wellington Wells Health Institute (located in the Parade District) seem to have completely gone against him. In addition to this, there is a toppled statue of Verloc in the head office of the hospital, replaced by a statue of Doctor Ridgwell, Verloc's statue has been defaced with the words "FUCK VERLOC." Simply put, Verloc is most likely to be "going on holiday" very soon.

On October 23rd, 1964, the workers at Haworth Labs have started a revolt against Dr. Verloc and blaming him for the recent bad batches of Joy. Demanding that he be removed as administrator and bring back Sally Boyle. Having barricaded himself in his office until the riot has died down.

After Victoria Byng stops the rioters, she confronts him on this, to which Anton claims that he's close to finding a permanent solution. After realizing Victoria is off her Joy, he plans to have her locked up with Harry Haworth, only to be reasoned by Victoria herself, stating that he cannot lock her "like poor mad Harry." He later reappears at the Dunkerton Waterworks to stop her from cutting off the Joy from the island's water supply.

When Victoria sets up the explosives to blow up Haworth Labs, Verloc orders Doctors and Bobbies to stop her. After setting off the bombs, she runs off leaving Verloc to his cries of dismay as the building starts to fall apart. He could have died in the final explosion but he most likely escaped though the Bobby popper in his office, since he knew that the lab was being blown up. Although that's pure speculation.'

"Unless you've got a magic formula for synthesizing Joy out of bleach, whiskey, and saltpeter, get out!"

"And what do you think you are now? *You* are just the sum of the neuropeptids swirling in your bloodstream."

"You see, the current Downer outbreak is just a mass chemical imbalance. But I believe I can adjust the internal hormonal settings so the people stay happy no matter what."

"They told the Wright Brothers they couldn't fly! But they did!"

"Oh no? I teach you everything I know, you steal my notes -- You steal my business, and you have the nerve to come back here..."

"And then you replace me with Byng?!"

"We were so close-- we were so close to cracking the isometric structure of the new molecule. I suppose you cracked it on your own, after you left, didn't you?"

"I don't care if the General's protecting you! You've gone too far this time!"

"I can't just think faster, Miss Byng. I work until every thought is rubbish, and then I try to sleep."

"I swear, I am this close to a permanent solution."

"But even if it doesn't work... at some point, you know, we'll be down to a sustainable population."

"After the Mood Booths, the water was obviously the next target. But to have it be you!"

"Miss Byng! What if you're wrong? What if their sense of hope is the only thing keeping them alive?"

"Are you really going to punish us all to save your guilty conscience?"

"Are you going to destroy your father's life's work? Will that finally make him proud of you?"

"I always did wonder if you'd end up a Downer yourself."

"Has it ever occurred to you that the problem all this time might be you?" 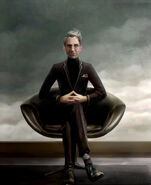 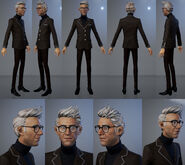 Retrieved from "https://we-happy-few.fandom.com/wiki/Anton_Verloc?oldid=16491"
Community content is available under CC-BY-SA unless otherwise noted.