A single popular song on a disposable vinyl disc.

45 RPM Record is a crafting and musical item in We Happy Few. It can be used to craft a Music Box or it can be used on Record Players to distract people nearby.

They can commonly be found in Wellies houses and rarely in Wastrels houses, when played on Record Players they will play a short piece of "House of Curioues Behaviours", the whole song can be heard at the Reform Club and in Faraday's home.

The surface of the Record has the title "The Compulsions", a reference to the developers of the game, Compulsion. on the right side there is the breaking face mask from the title card without the flowing hair, at the bottom it says We Happy Few, and on the left side it says Side A - with Side B written on the other side. 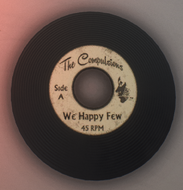 Item seen in game
Add a photo to this gallery
Retrieved from "https://we-happy-few.fandom.com/wiki/45_RPM_Record?oldid=9772"
Community content is available under CC-BY-SA unless otherwise noted.